Splinterlands Weekly Battle Challenge - DISINTEGRATOR! Hello Splinterlands Community!! This post is about the Weekly Battle Challenge with DISINTEGRATOR!!!!!!! ![image.png](https://files.peakd.com/file/peakd-hive/karamyog/EoeCZ6zxvYXpkD7eFKVuDDgtX5YVD8Zs4KZnZjRnsQ8YP49FLGkCg2L4bGbbBLUeHQN.png) Disintegrator is one of the best neutral monsters in any lineup, especially in battles that are Melee attack heavy. For example, many times when playing Splinterlands battles, one has to play within a set of rules, and oftentimes there are rules that give Melee attack monsters an advantage. Some of the rules are as follows - 1. Only Melee attack monsters can be used. 2. Melee attack monsters can attack from any position. 3. Melee and Range attack monsters never miss when they attack. The above 3 rules are some examples I can think of. Moreover, new users who play with Starter cards, have more summoners who give Melee attack monsters an advantage and even monsters with Magic attacks are generally low on health on average. There are more Monsters with Melee attacks who have sneak or opportunity abilities. Point is that Melee attacks are always in the line-up and usually more than 1 in number. Thus the DISINTEGRATOR becomes a very important card as it has the DEMORALIZE ability. ![image.png](https://files.peakd.com/file/peakd-hive/karamyog/23uQkM3BVH3Uw4Nniw5A8XWt6YeHtuHuTTGYtifFgyum7dnCLvixkxXLxqrMoDZiLwCRj.png) I have a level 2 card. The only difference in stats in Level 1 and Level 2 is +1 Health, therefore I have a slight advantage when using this card. Below are the enhancements in stats and abilities as one levels up with Disintegrator. ![image.png](https://files.peakd.com/file/peakd-hive/karamyog/23u5XNH7wwvEFE7NKnami6ZoquGT4kNpAWABvFYkYpKmUdMCEfWugwvMYLuwiC1Cih6a4.png) *** **Battle Rules** ![image.png](https://files.peakd.com/file/peakd-hive/karamyog/23vsBujd284ZLZuct27oMnmd8gkqXGHq1YLgTWsbs5U1Sq9c3TChcuBbrmEPMgUGozo2Y.png) 1. All Non-Flying Monsters take 2 Melee damage at the end of each round 2. Magic Attack monsters cannot be used 3. Can play with Wind, Life, Death, and Dragon Splinters Based on my experience, Water Splinter becomes a great choice in high Mana Battles because it has some great monsters but most of them are 6+ Mana. Moreover, apart from Fire Splinter, Wind Summoners are best for Melee battles. I chose to go with Wind Splinter for my battle and went for the following team - **Summoner** ![image.png](https://files.peakd.com/file/peakd-hive/karamyog/23u5teECKY7FhQEy5EPX9m2S7w9fA22ifm2cgHRGGzBvfLKsrcHZVafuCeVSPgzNtTG5L.png) **Team** ![image.png](https://files.peakd.com/file/peakd-hive/karamyog/23uQnVkJqWikHjvN1T3KaXLALMVESPXezfNgtpjRrgXLmipm1KXcnE5p8dhq46Mt6UNaH.png) **Reason for Team Selection - Strategy** This is a High Mana Battle and Magic Attack monsters cannot be used as part of the rules. Therefore Wind Splinter becomes a good choice because it has high stat monsters that are given an advantage by the summoner I chose. The wind has monsters that have high Melee attacks, High Speed (better chance of evading attacks), and High Health. High Health helps with the second rule as it takes longer for monsters to lose health after each round. Among the set of Splinters allowed, I was assuming that my opponent will also choose Wind Splinter. Therefore I decided to reduce the attack of the opposite team with the disintegrator and also force all monsters that can attack to attack not my tank, but another monster in the middle that has Taunt ability. The Monster with the lowest health in my team had flying ability so does not take damage to health at the end of each round. Not only was I able to form a good team but my Strategy of using DISINTEGRATOR worked well in the battle despite my DISINTEGRATOR not being able to attack at all. 5 monsters in my team were attacking in each round whereas for the opponent it was all 6. Despite that, I won the battle. My tank could not be attacked as the opponent was hoping for and I won the battle in the end. **Battle Links** You can find my battle link and Youtube video below: https://www.youtube.com/watch?v=-8sX7hVsd98 [Splinterlands Battle Link - DISINTEGRATOR](https://splinterlands.com?p=battle&id=sl_fa948e53432956f01e3842a9f6987ca1&ref=karamyog) *** I did win the battle and hope you all liked my strategy. Let me know your thoughts in the comments below. @karamyog

Your content has been **voted** as a part of [Encouragement program](https://ecency.com/ecency/@good-karma/encouragement-program-continues-82eafcd10a299). Keep up the good work! <br><br>Use Ecency daily to boost your growth on platform! <br><br><b>Support Ecency</b><br>[Vote for new Proposal](https://hivesigner.com/sign/update-proposal-votes?proposal_ids=%5B197%5D&approve=true)<br>[Delegate HP and earn more](https://ecency.com/hive-125125/@ecency/daily-100-curation-rewards) @ecency 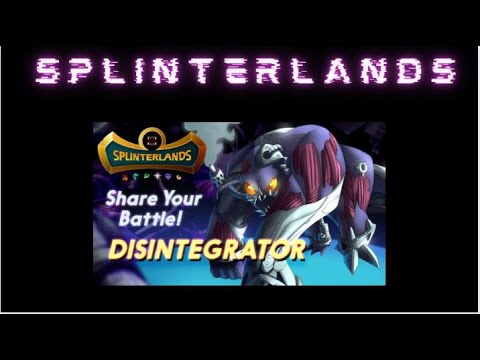